The Morrison government is looking to sidestep the high court’s decision that Aboriginal non-citizens cannot be deported using the aliens power by using other powers instead, the attorney general has said.

Responding to the high court’s landmark decision on Tuesday, Christian Porter said he found “great strength of reasoning” in chief justice Susan Kiefel’s minority judgment and the government may be able to legislate to deport the “not very large” group of Aboriginal non-citizens who have committed crimes in another way.

In a four-to-three decision, the high court held that Aboriginal people with sufficient connection to traditional societies cannot be aliens and therefore are beyond the reach of existing deportation laws which depend on the aliens power in section 51 (xix) of the constitution. 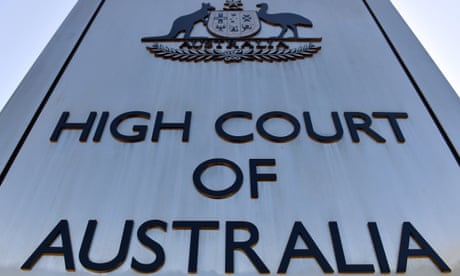 Porter told 6PR Radio on Wednesday the decision has “very significant, immediate ramifications for what might not be a very large group of people”.

Porter noted this group – “people who are born overseas, who aren’t Australian citizens, but may be able to show indigeneity and who are in Australia on a visa and commit an offence” would now “have to be treated differently from all other persons in the same circumstances” because they cannot be deported under existing law.

“So, it has a clear impact for that group of people and that policy of deporting people who’ve committed serious offences while on a visa and who are non-citizens,” he said.

“And we’ll be looking into ways in which we might be able to effect that policy, without reliance on the power that we previously were relying on, but we’ll look at that.”

Porter tacitly endorsed Kiefel’s view, saying her “minority reasoning was what I would have expected” but conceded the majority view would have implications for the federal government’s “program of pretty vigorous deportation of people that we consider represent a threat to the Australian community and Australian citizens”.

In his minority judgment, justice Stephen Gageler laid out a blueprint for how parliament could address the “complications and uncertainties” created for the maintenance of an “orderly immigration program” by reinstating its powers to deport Aboriginal non-citizens.

He said these could be addressed “by the commonwealth parliament reverting to the approach of relying on the power conferred by [section] 51(xxvii) to make laws with respect to ‘immigration and emigration’”.

“Alternatively, the commonwealth parliament might consider itself obliged to address them through racially targeted legislation enacted under s 51(xxvi) of the constitution [the race power].”

Gageler said on the “correct understanding” of the aliens power “neither is a course which the commonwealth parliament ought to be driven to take”.

Porter also acknowledged the judgment “may have broader implications”.

“It creates an entirely new category of people in terms of what the government can and can’t do,” he said, in reference to the new category of “belonger” – a non-citizen non-alien, recognised by the majority.

“Whether or not the principle has application in areas where the commonwealth relies on other heads of power, I think, is far less clear.”

Porter argued it was “not always an easy test” to determine if a person is Indigenous, citing the fact the court now requires a further hearing to determine if the second plaintiff, Daniel Love, is accepted as Aboriginal Australian by the the Kamilaroi tribe.

Although the decision has already provoked a furious response from conservative commentators who argue it introduces a new race-based distinction in the constitution, legal experts including Sydney University constitutional law professor, Anne Twomey, have warned it was too soon to know what the possible ramifications for the case might be beyond immigration law.

Wamba Wamba lawyer Eddie Synot, manager of the Indigenous Law Centre at the University of New South Wales, said the judgment concerned a “very narrow application of the aliens power” and explicitly stated it was not a recognition of Aboriginal sovereignty.

“More than anything for me, today just confirmed that the high court is never really going to be an environment where we’re ever going to be able to settle those original questions about sovereignty and the founding of the nations,” Synot said. “It’s going to have to be a political decision outside of the court.”

Synot said the decision had caused some angst among Aboriginal people concerned that a court was yet again appearing to decide on Aboriginal identity and belonging to country. Those concerns have been heightened in recent weeks by a request, swiftly denied, for police to investigate the Aboriginality of author Bruce Pascoe.

… we’re asking readers, like you, to make a new year contribution in support of the Guardian’s open, independent journalism. This has been a turbulent decade across the world – protest, populism, mass migration and the escalating climate crisis. The Guardian has been in every corner of the globe, reporting with tenacity, rigour and authority on the most critical events of our lifetimes. At a time when factual information is both scarcer and more essential than ever, we believe that each of us deserves access to accurate reporting with integrity at its heart.

More people than ever before are reading and supporting our journalism, in more than 180 countries around the world. And this is only possible because we made a different choice: to keep our reporting open for all, regardless of where they live or what they can afford to pay.

We have upheld our editorial independence in the face of the disintegration of traditional media – with social platforms giving rise to misinformation, the seemingly unstoppable rise of big tech and independent voices being squashed by commercial ownership. The Guardian’s independence means we can set our own agenda and voice our own opinions. Our journalism is free from commercial and political bias – never influenced by billionaire owners or shareholders. This makes us different. It means we can challenge the powerful without fear and give a voice to those less heard.

None of this would have been attainable without our readers’ generosity – your financial support has meant we can keep investigating, disentangling and interrogating. It has protected our independence, which has never been so critical. We are so grateful.

As we enter a new decade, we need your support so we can keep delivering quality journalism that’s open and independent. And that is here for the long term. Every reader contribution, however big or small, is so valuable. Support The Guardian from as little as $1 – and it only takes a minute. Thank you.

Previous Post: « ‘Stubborn, wrongheaded’ approach to family law will fail
Next Post: How Australia introduced ‘no-fault divorce’ — and why our family law system is under review again- Written by Farz Edraki and Keri Phillips for Rear Vision﻿ »